Clickable areas on the map are: En, Kei, Kou, Tai, and the Yellow Sea. 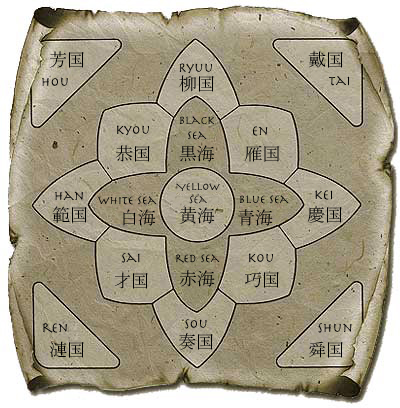 Used to travel back and forth between the twelve kingdoms and the world of the kaikyaku and sankyaku, Gogou Gate can only be opened in the moon's shadow, using the moon's power. The ability to open the gate can only be achieved by top-ranked sages or youma like meishoku.

From every district to prefecture castle there are twelve gates. The gates are named after their respective zodiac animals, and are positioned according to their zodiac directions. Even the months each gate corresponds to in the zodiac has importance, as can be seen by how Chi Gate, which only opens during the spring equinox, takes the place of the Dragon and Snake Gates (March-April, aka spring).

Sign of the Dragon. East-southeast. March. In Ken, Chi Gate takes the place of this gate.

Sign of the Snake. South-southeast. April. In Ken, Chi Gate takes the place of this gate.

Note: I am using Eugene Woodbury's translations for the various jurisdictions. Yoshie Omura's 十二国記の部屋 has also been helpful in providing further descriptions. The romaji readings for the Twelve Gates may not all be correct.